It’s been a dry month. Lots going on. Tomorrow, we’re holding a fundraiser for our school, a literary dinner featuring Lalita Tademy, author of three fabulous historical novels: Cane River, Red River, and Citizens Creek. I’ll give you a recount of the evening next week.

What Do You Do With An Idea?

“Where did it come from? Why is it here?”

I wondered, “What do you do with an idea?”

The child tries to ignore that pesky idea, thinks it seems “kind of strange and fragile.” The child goes so far as to “act like it didn’t belong to me.”

Then we get the page turn and:

But it followed me.

The child worries about what others will think, so it hides the idea away. But it keeps growing and growing, along with the child’s love for it. Until the child builds the idea a place where it is safe to dream.

The idea and the child become friends as they share secrets. The idea shows the child how to walk upside down

“Because,” it said, “it is good to have the ability to see things differently.”

The child soon becomes unable to imagine life without the beloved idea. Then one day: 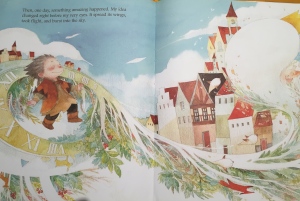 the idea “spread its wings, took flight, and burst into the sky.”

The idea becomes ubiquitous. It becomes “part of everything.”

And then I realized what you do with an idea…

You change the world.

This book, similar to Seuss’s “Oh, the Places You’ll Go!” is a worthy gift for all the young idealists, the forward-thinkers, the world-changers you know who may be graduating right now. It received a well-deserved Independent Publisher’s Gold Medal in 2013.

Title: What Do You Do With An Idea?

46 thoughts on “What Do You Do With An Idea? – Perfect Picture Book Friday”

Some latest and greatest! #bookstagram #picturebooks #hotoffthepress
It’s starting to get real. pbspree is a group of picture book authors who are publishing in 2023! Follow us here and on Twitter for giveaways of critiques and books starting later this year! #teachers #librarians #bookstagram #books #picturebookauthor #picturebook #giveaways
Who says writing nonfiction picture books is simple? Here are some of the research papers that went into my debut, RIVER OF DUST: How Nutrients from North Africa Nourish the Amazon Rainforest. Follow @pbspree for more info and giveaways, starting this fall!
Hey, folks! Marzieh Abbas is just one of 16 fabulous authors in PBSpree with beautiful books coming out in 2023! Check out @PBSpree on IG and Twitter. We’ll be giving away critiques and books starting in the fall! Thanks!!
Let’s try this again and see if I can get everyone’s head in the frame. Tall people often lose their heads…Congrats to my beignet fiend and future aerospace engineer!
Look what just arrived! Thank you @devpetty!! Thinking it belongs on perfect Picture Book Friday…#bookstagram