Most holiday gingerbread creations are lovely houses filled with magical red and white peppermint swirls, candy canes, Necco wafer roofs, and gum drop borders. A harmonious vision of how sweet the world should be. 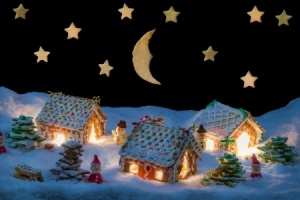 In others, the story is a little less benign. A creaky old woman wearing a scarf and apron (we know who she really is) beckons to a couple of small children, luring them into her tasty gingerbread home. The snow-covered landscape is playful and inviting, yet somehow menacing.

Come into my parlor, children…

And then there are those who don’t bother with the subtleties of storytelling. Such as our 10-year-old son and his friend. This past Christmas Eve, our guests gazed in wonder at the ice cream cone trees, the swirls of snow that the boys created.

All is well at the castle…

Looking more closely, our guests realized that something was amiss and gasped.

“Is that blood?” someone whispered.

“Yes,” I said, and then explained that the scene depicted medieval times. Oh, AND that the missing half of the gingerbread diorama (that went home with the friend) was a rival Gummy bear castle. Perhaps England and France? There was a siege and, well, the result wasn’t pretty. Even the trees expressed their horror at the carnage.

Backed against the wall

There’s also no shortage of potty humor, serving to explain the yellow snow, compliments of the Golden Gummies and one Green Gummy on the upper terrace. And I think they’re trying to distract the tree that ended up with a skewered Green Gummy in its mouth, blood drizzling down its frosted coconut limbs.

Not a pretty sight

Some Golden Gummies died alone behind the battlement… 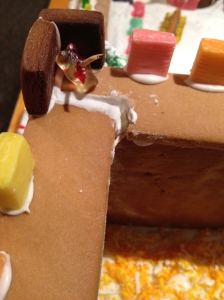 A witch directed her Green Gummy Bear army while the peppermint and green coconut trees looked on, agog.

The witch’s sister, a cold-hearted woman, took a shower in her comfy shag rug castle keep, while the battle raged outside the castle walls. 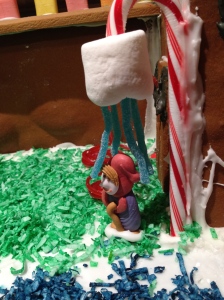 Not content to set a turret on fire, the Golden Gummy army attacked with a pretzel log battering ram.

One Golden Gummy lost its life in the tar pit (the wonders of black food coloring). 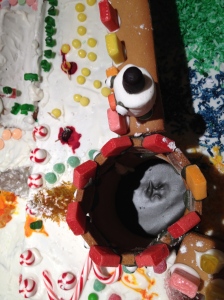 The Green Gummy Bear army attempted to board a Golden Gummy raft to cross the river into enemy territory, sustaining heavy casualties, notably the speared Green Gummies bleeding next to the frolicking salmon in the river.

The Marshmallow Mayor of the castle looked out from behind the battlement, bug-eyed at the realities of war—yet another speared Green Gummy lying in massive quantities of blood. And yes, there’s a small dog sniffing at the foot of the pineapple-crowned evergreen.

Some of the Green Gummies insisted that war was for fools and went snowboarding on the castle’s half pipe. 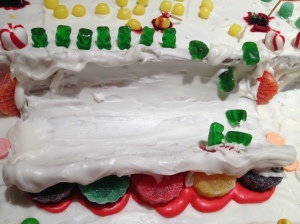 While still others play rappelling games down the back of the keep. 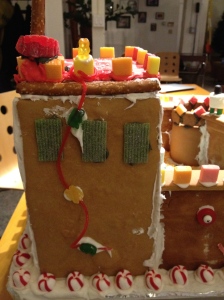 The Green Gummies, typical of the monied elite, employed Licorice Minions and Starburst Battalions to do most of war’s dirty work.

Was there a happy ending to this sordid war? The castle seems to think so…

But I suspect that all gingerbread constructions maintain some active form of denial. Just ask the Brothers Grimm.

In this coming New Year, may you spin tales that are much more entertaining and far less violent than this one!! 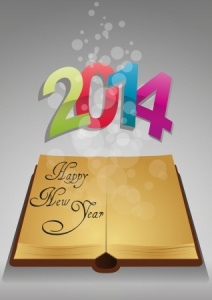 P.S. For those of you wondering about the round turrets, my husband used a structural gingerbread recipe and laid rectangles of rolled dough over empty Laphroaig scotch containers to form half cylinders. Watch the time lapse movies, 1st and 2nd half of the making of the complete diorama here: