Some picture book biographies are meant to be read by older elementary school kids. For example: 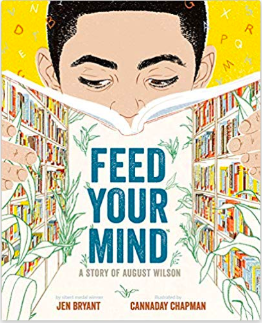 a story about the events that turned August Wilson into a poet and playwright who goes on to win two Pulitzer prizes.

Bryant’s language is suitably lyrical for the subject.

They call it “Little Harlem”—the city within a city.

A mile east of downtown, it is a mishmash,

a melting pot of workers and their kin—

their homes, apartments, and shacks 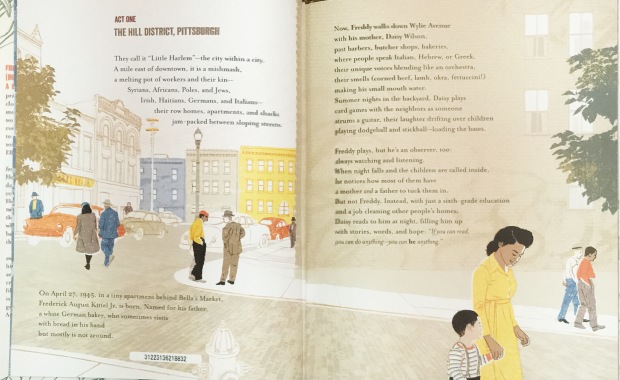 It is here that Frederick August Kittel, Jr. the son of a white, German baker and an African-American housekeeper is born. With a mostly absent father, it’s up to his mother to give him an appreciation for the written word, saying “If you can read, you can do anything—you can be anything.”

His mother takes him to a branch of the Carnegie library of Pittsburgh where he receives his first library card and discovers a shelf labeled “Negro Books” written by Hughes, Dunbar, Ellison, and Wright. His family experiences racism firsthand in the form of a brick, when they move to a mostly white neighborhood. His freshman year at a Catholic school, kids call him “nigger.” And bully him so badly that the school principal puts him in a cab so he’ll get home safely. 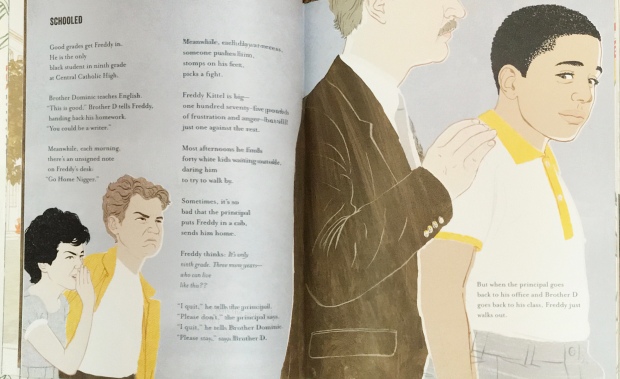 He quits, and his angry mother who works so hard (and who wants him to be a lawyer) says “Now what?”

all kinds of metal stuff,

But wait a minute….these are

Some kids are fifteen and can’t read.

This is my education?

He quits again and switches to a public high school as a last resort. Subjected to the same name-calling, fights, and stares, he gives history class one last try when asked to write a paper on someone he admires. He writes a 20-page paper on Napoleon that his teacher insists can not be his work. 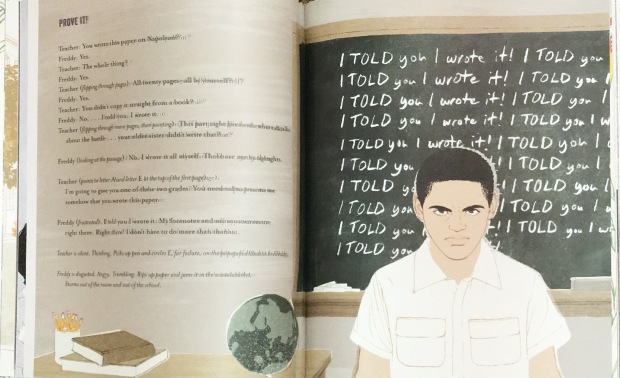 Angry when she gives him a failing grade instead of the “A” he rightly deserves, he quits school one last time and takes refuge in the Carnegie library, where he continues to discover the ideas and writings of more African-American writers. His thirst for knowledge turns him into a self-taught poet and playwright who honestly depicts and honors the African-American experience.

I loved Bryant’s description of how Wilson worked intuitively, listening to people talk at the jitney station or pool hall, and piecing together plays from snippets of overheard dialogue and the voices he often recalled in his head.

In the author’s note, Bryant explains that she used quotes from Wilson when possible, and in some cases she “wrote spoken lines base on what I thought he and others would say in that situation.” So this book is technically a work of historical fiction, but would most likely be found in biographies or the nonfiction section of the library, as she worked hard to remain true to the events of the story.

Here are a couple more of Wilson’s quotes for your enjoyment:

“I just write stuff down and pile it up, and when I get enough stuff, I spread it out and look at it and figure out how to use it.” — August Wilson

“I crawl up inside the material, and I get so immersed in it that as I’m inventing this world, I’m also becoming a part of it.” — August Wilson

My apologies to the illustrator, Cannady Chapman, as my photos don’t do justice to the muted palette of the illustrations. I love the illustration that shows August in a library sprouting plants from the books and shelves, a marvelous metaphor for Wilson’s organic way of learning, thinking, and writing that falls in line with the title of the book, Feed Your Mind.

Write and construct your own book

Take a trip to the public library and check out books. Ask your librarian if they have books that are plays for children, and see how they are written in comparison to novels.

Pair this book with another written by Jen Bryant, A RIVER OF WORDS: THE STORY OF WILLIAM CARLOS WILLIAMS. How were the lives of these two writers similar? How were they different? Why do you think they were different? How do the different illustration styles contribute to the overall feel of the book?

Title: Feed Your Mind: A Story of August Wilson 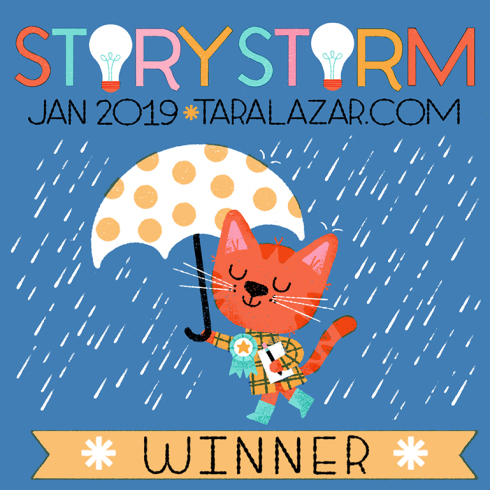 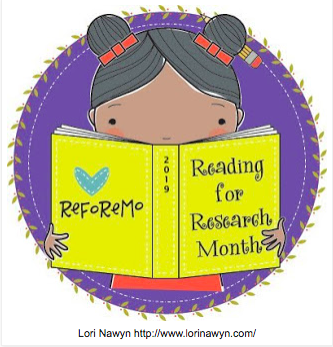