In the spirit of multicultural children’s book day AND Perfect Picture Book Friday, I decided to feature a book I love about a courageous woman, Ghengis Khan (aka Maria Toorpakai Wazir). 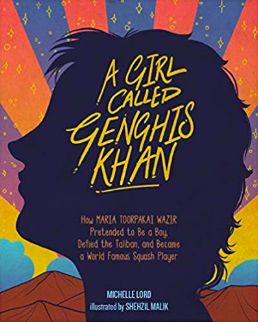 What does Maria, a girl being raised in a rural area of Pakistan, do when she doesn’t want to conform to Pashtun tribal culture and wants to run free like the boys? 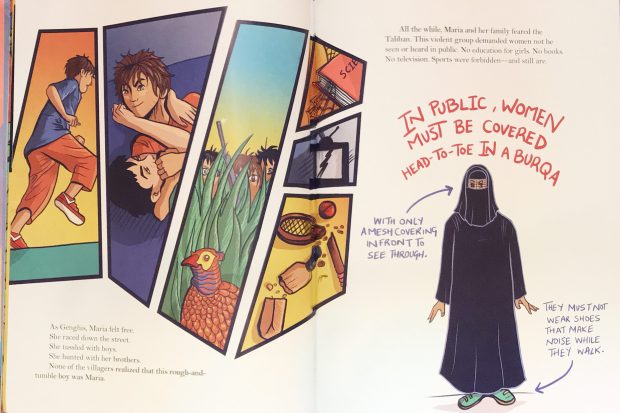 She cuts her hair, burns her dresses, wears boys’ clothes, fights with the boys, and goes hunting. She’s a wild one, often wrestling and beating other boys. She is so fierce, in fact, that her father names her Ghengis Khan and tries to channel all of that energy into sports.

Turns out Maria LOVES squash, but when everyone at the squash club finds out she’s really a girl—the only girl—she endures bullying and all sorts of taunting from her teammates and community. 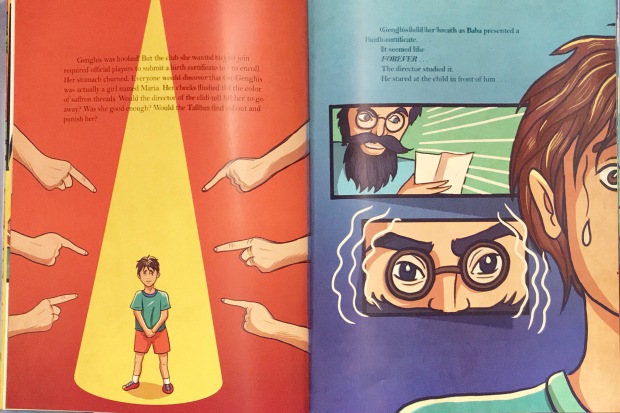 “I had to fight to play, fight for my beliefs, fight for the right to just—BE WHO I AM!”

She ignores them. She is laser-focused on practicing. She plays and wins tournament after tournament, but when the president of Pakistan gives her an award for outstanding achievement, the Taliban don’t just threaten her, they threaten her club and her family. For the safety of everyone, she has no choice but to quit the club. Although she doesn’t quit playing squash.

She practices ten hours a day every day for THREE YEARS against the concrete wall of her bedroom, until she decides to leave her country to fulfill her dream.

But she doesn’t leave Pakistan for good. After making a name for herself in the sports world, she returns and starts a foundation that helps change the lives of girls through education and sports. She also becomes a member of the International Olympic Committee’s Women in Sport Commission to help promote the rights of women and girls in sports. AND she still plays squash, thumbing her nose at ongoing threats from the Taliban.

Hats off to this amazing young woman!

The vibrant graphic-novel-like illustrations are suffused with Maria’s energy. And her thoughts, sprinkled throughout the illustrations, add a layer that deepens the emotional impact of her experience.

The back matter talks about how Maria’s parents were instrumental in her success: her mother was the only woman in her village who had gone to school, and her father believed in equality for men and women and shielded Maria and her sister from external disapproval.

I also found this short film shown in an NPR article.