I’ve been smitten with BORN BAD for some time, now. The cover screamed “Pick me up!” And what I found on the interior whispered, “Take me home.” I did.

Doesn’t that look like an evil wolf? A big bad wolf? A wolf on the wrong side of the law?

But it turns out that:

and when he looked bad, he felt bad, and

when he felt bad, he acted bad. 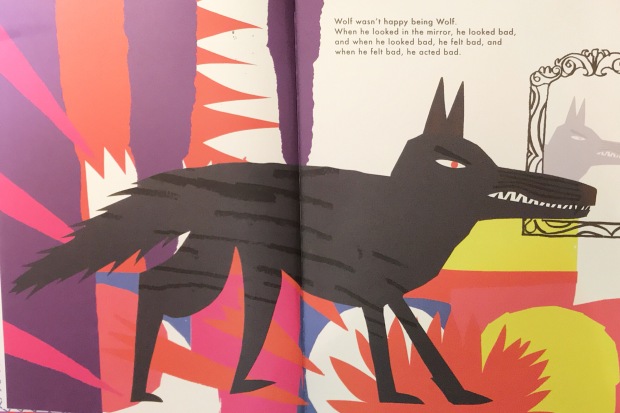 Wolfie wonders whether he has to be this way, and by extension, he wonders if a leopard can change his spots.

“Of course she can’t,” said Leopard.

“I was born spotty and you were born bad.”

Hmmmmmm. Notice what happened there, the gender switch of pronouns between Wolfie’s question and the leopard’s answer. Brilliant and purposeful.

Enter the chameleon who asserts that it doesn’t have to be that way. Chameleons change often. Wolfie argues that the chameleon isn’t really changing, it’s just using camouflage. So the chameleon gets angry and argues that it can change color when it’s angry or sad, too. Wolf isn’t bad, he’s just ignorant.

Enter Caterpillar, an animal that Wolfie says wraps itself in a cocoon and turns into a butterfly. Simple.

Caterpillar asserts that it isn’t so simple and describes the process of metamorphosis.

“And the worst part is, I put in all that effort and then I die after two weeks.”

Salamander meanders by and mentions that lots of animals change. She used to be a fish and lived in pond, for example.

“Sometimes to grow up, you have to leave things behind.”

And then folks, then then then this lovely book goes over the top. Salamander invites Wolfie to meet some friends. Turns out it’s an animal support group meeting (without calling it that, of course) where everyone wears name tags, including Seal, Mimic Octopus, Reed Frog, Flounder, and Salamander.

Each one explains how they change.

“Sometimes it’s exhausting…I forget who I really am.”

“I grew up as a girl, and one day I woke up and I was a boy! At first I found it very confusing, but now I’m cool with it.”

One by one, each animal describes how they change. Then Wolfie decides to get real. He confesses that he doesn’t like what he sees in the mirror.

“It’s hard to be nice when you just want to smash things up.”

I don’t want to give away the whole book. It’s filled with wry and sly humor, unexpected lines, and an extremely unexpected and brilliantly perfect ending. One that will make you smile. If it doesn’t, let me know.

The hand-drawn mixed media artwork by Stephen Smith is bold and stunning, a perfect match for the text.

Pair this book with INTRODUCING TEDDY by Jessica Walton

Explore gender roles with this activity: “Boys Can’t Do That!

Make a wolf puppet and then transform it to look like Wolfie at the end of the book.