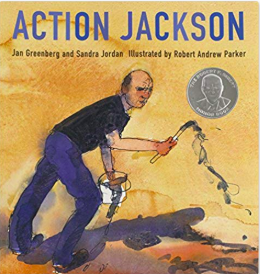 I found Action Jackson while wandering through the library the other day, looking for mentor texts for a picture book biography about artists that I’m writing. Although the longer text (1,885 words) reveals that it’s an older title (2002), I wanted to feature it here because I LOVE it!

The opening: “In the afternoon, Jackson Pollock puts on his paint-splattered boots and walks across the yard.” 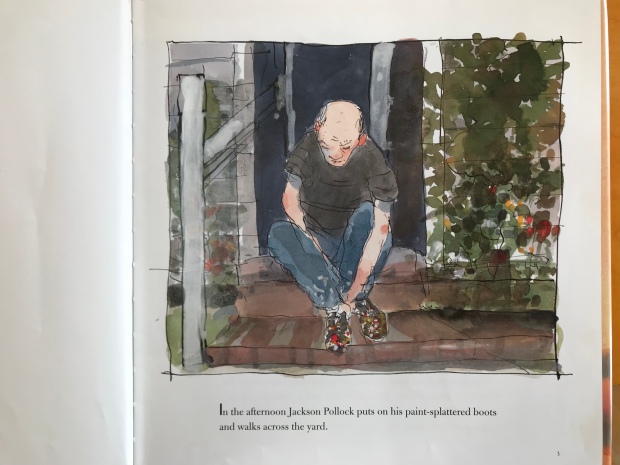 “The wind blows in from Gardiners Bay, bringing the scent of salt marshes and sea lavender. His eyes miss nothing—sunlight on the tree branches, tangled stalks of blackberry bushes, beetles crawling in the grass underfoot.

Caw Caw, the crow he tamed, flies down and lands on his shoulder. His Border collie, Gyp, runs in circles demanding a walk, across the fields and down a country road to the wide, sandy beach. But Jackson turns and keeps going.”

We are there, absorbing the setting through touch, scent, sight, and sound. The paint-splattered boots, dog, and pet crow pull kids in to this artist’s life.

And then we venture closer to see how Pollock paints with the canvas on the floor, so he can move around all four sides, even walk across it. Using ordinary house paint, instead of the fine artist’s oils or acrylics. Paint that reaches the canvas not through a brush but through the air, through his hands, and feet. The swoops and slashes indicating how he has moved his body.

We are drawn inside his head through artful use of quotes, containing Pollocks’ own words about his process.

“I want to make a longer and longer line. I want to keep it going.”

We sit with him and wait for inspiration. He rises, and we watch as “he swoops and leaps like a dancer,” creating Lavender Mist, one of his most famous paintings.

And then we hear the public’s reaction. It’s a mixture of shock, anger, confusion, and excitement. No one else has ever painted this way. And “some are filled with happiness they can hardly explain.”

Finished, exhausted, Pollock returns to an ordinary existence, working in the garden, driving the old car to town, digging clams at the beach, and having a party for friends. He fills himself up with other things before once again returning to his studio, where he sits in silence, waiting for inspiration and looking so small in front of that vast expanse of canvas.

This last image is masterful.  We feel him waiting, patiently, until his spirit moves.

At nearly 1,900 words, this book is more appropriate for older elementary kids, although teachers or parents could paraphrase the text and use the resources suggested below for the younger crowd.

The watercolor and pen illustrations suit the subject matter well with their loose structure and array of vibrant (when it comes to painting) and muted (daily life) color palettes that blend well together.

The authors include a more extensive two-page biography, photos of the artist and his paintings, two pages of notes and sources, and a final page for the bibliography in the back matter. It’s a great starting point for kids who are writing nonfiction biographies as part of the core curriculum.

They also include a note on the opening spread that explains how some of the story is imagined, but based on what is known about the two months when Pollock made his first action painting.

It’s a fantastic addition to any art discussion about breaking the rules and following your own path of inspiration.

The Tate Museum has a wonderful website for kids with a page called “Who Is Jackson Pollock?”

Make your own Pollock paintings

And…another new favorite! Some pages may make you 😂 #picturebooks #bookstagram
This has got to be the coolest book-related activity ever!!! ❤️❤️❤️ #pride #nonfiction #picturebooks
I want to read this book
Books Inc warehouse sale today! a few unusual ones in this stack, too. Yay, indie bookstores!!
I have a new favorite. Too bad the lake yellow background doesn’t show up well. Written in rhyme, and loaded with cool and funny facts. Coupled with fabulous illustrations, it’s awesome!!!
Smitten!