Frankenstein was not a “must read” for those of us becoming engineers in the early 1980s. I’d heard of the monster, but had no idea of the story behind it. Now, it appears to be required reading for those capable of creating any sort of biological or technological monster, intentional or otherwise. Many consider this story to be an apt metaphor for the atomic bomb and its developer, Oppenheimer, who expressed regret at what had been unleashed on humanity.

The ultimate question raised by Mary:

“…what would happen to that ‘lifeless matter’ once someone had given it life?”

Turns into an indictment of the friends she’s so determined to impress. She notes that:

“The men did not seem to care. They only asked if something could be done—never if it should.”

I read the story while earning my MFA, however, and I loved hearing about how a young woman with a mind of her own created this cautionary tale in the early 1800s. And now we have a brief history behind this story (given the scandal surrounding Mary and her friends, a very watered-down version as is required for this age group) in picture book format. The cover sets the tone.

The first spread takes us to a dark and dreary countryside midst a nighttime storm. Here we discover that stories are swirling in Mary Shelley’s head. Stories that she’s heard, stories that she’s read, stories from her friends who are with her. She wants to be a writer, and she wants specifically to write a ghost story, for that is the directive from the host of the group, Lord Byron. 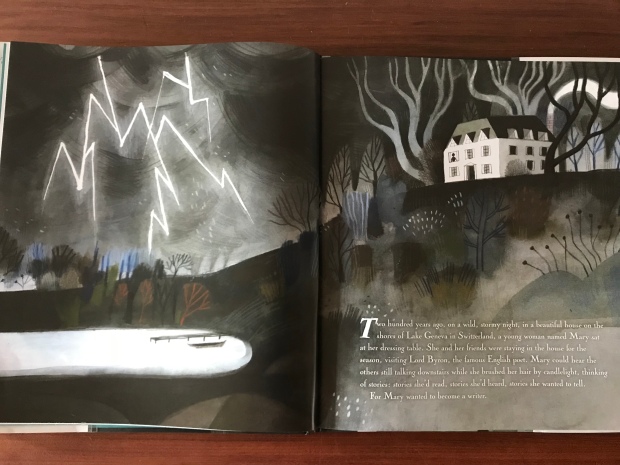 The author, Lynn Fulton, takes us through Mary’s thoughts as she’s trying to come up with an idea for a story that will entertain her friends, clearly stating in the author’s note why she added Mary’s thoughts about her feminist mother, who died when she was a baby, to the narrative. 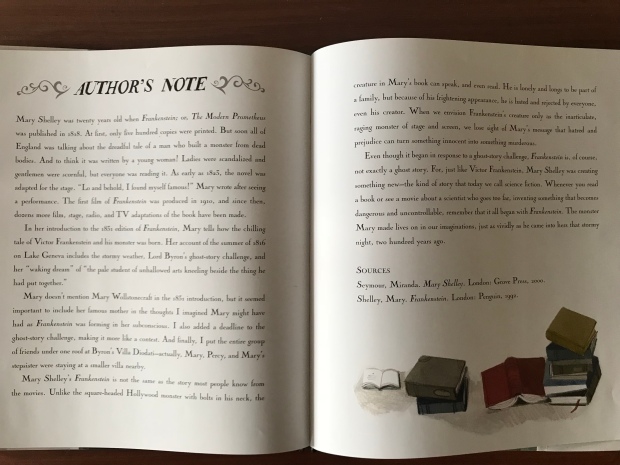 Given what Mary was trying to do, create a story that would hold a candle to the stories created by all of the literary men in her life, it seems reasonable that she would dwell on ideas that would have been considered “monstrous thoughts,” like women having ideas of their own and publishing them.

Fulton bases her account on the introduction to the 1831 edition of the story, one that tells of Mary’s “waking dream” that gave birth to Frankenstein.

Fulton shows how Mary pieced together disparate thoughts to create her groundbreaking story,  a story that just happened to become one of the most haunting and discussed tales of the past two centuries. Budding writers can watch as Mary’s story begins to take on a life of its own.

First published in 1818, Frankenstein continues to engage and disturb casual readers as well as those involved in scientific pursuits everywhere.

The illustrations, mostly in shades of black and white with an occasional pop of color, add to the book’s eery quality. And it doesn’t hurt that a solitary raven shows up on a couple of pages. Poe is never mentioned, of course, but that raven continues to haunt me.

TItle: She Made a Monster: How Mary Shelley Created Frankenstein

8 thoughts on “She Made a Monster – Perfect Picture Book Friday”