I attended a screening of local films, called “The Best of Bernal,” a few nights ago. A documentary directed by San Francisco’s public defender, Jeff Adachi, highlighted racial bias in law enforcement. He hopes to show it widely to raise awareness of just how insidious and damaging racial profiling is.

Another film juxtaposed U.S. government archival footage of Japanese internment camps with “home” movies filmed by those who were interned. At one point, the faces of two mothers, both Japanese Americans, were stoic as they accepted medals from the U.S. government for the death of their sons in WWII. The reason their sons enlisted? To prove they were not traitors. The unshed tears of the mothers dissolved into a pool of water, creating concentric ripples that then dissolved into ripples of a koi pond. How apropos and moving that the koi is a symbol of strength. It was a masterful image sequence that will stay with me forever.

While both of these films were fantastic, they were made by adults, the latter a highly experienced filmmaker.

Enter, the prodigy. I would like to feature the film that was made by a friend’s just-turned-16-year-old daughter, Annabella Mortenson. She’s a student at the Ruth Asawa School of the Arts in San Francisco. Her inspiration? California’s years-long drought that was finally broken this past winter while she was making this film.

In case you’re wondering, the concrete bunkers shown in this film are from World War II, when the headlands by San Francisco Bay were protected with heavy artillery. The remnants  of these bunkers

that were once almost completely buried in earth are now exposed due to years of erosion. Some of the bunkers have fallen into the sea. The one shown above sits precariously above the Pacific.

I’m having trouble embedding the film into my post, so please paste the URL into your browser, delete the space I’ve inserted between the https and the colon, and then watch it on VIMEO. 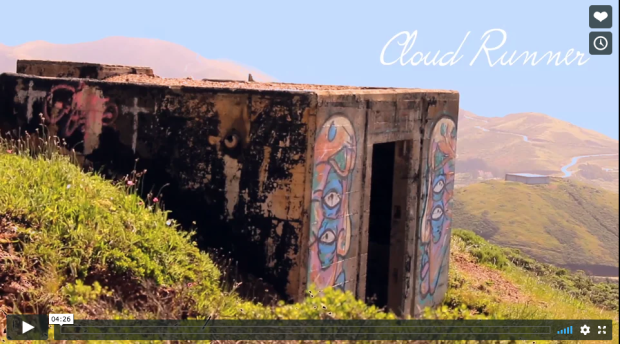