In a nation overtaken by arguments about immigration and the building of walls, Shanthi Sekaran’s new novel 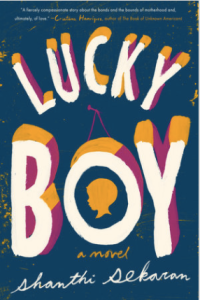 underscores the complexity of the situation.

But immigration issues are more than a decorative backdrop in Sekaran’s novel. They provide the disturbing context for its premise: two women fighting for the right to raise one child, one of them the birth mother, the other unable to conceive a child of her own. The former is a young, undocumented immigrant in the U.S., who works as a nanny-housekeeper for a Berkeley family. The latter is an affluent daughter of successful Indian immigrants who made California their home in the 1970s.

I thank the Muses that we live in the San Francisco Bay Area midst so many talented, astute, and diverse authors. In recent years, we were fortunate to host Mary Roach, Lalita Tademy, and Nayomi Munaweera at our women’s literary dinner. This year, we were lucky to dine and talk with Shanthi Sekaran.

Given the current state of immigration upheaval in the U.S., Lucky Boy is certain to raise even more questions about longstanding failures related to immigration detention, deportation, and the fate of children of undocumented immigrants.

However, other questions tend toward the personal: What defines motherhood? What is most important when raising a child? What do we mean when we consider the best interests of a child?

Two narrative threads course through Lucky Boy, one of Soli, the teenager from a tiny village in Oaxaca, Mexico, and the other of Kavyah, a 30-something, second generation Indian-American living near the Gourmet Ghetto in Berkeley, California.

Kavya, a chef, enjoys a privileged life, one where the greatest challenge turns out to be getting pregnant. When we’re first introduced to her, she and her husband, Rishi, are getting ready to attend the wedding of one of her childhood rivals and friends.

“Preeti Patel was getting married and sealing forever her victory over Kavya. Over the years, the girls had grown from playmates to rivals and begrudging friends. To be fair, it was Kavya who begrudged; Preeti was endlessly gracious, completely unimpeachable in her maintenance of friendship. Preeti was infallibly interested and interesting, and if she felt superior to Kavya, she never spoke of it, never mentioned her own achievements. That was left to the mothers.”

On the other end of the immigrant spectrum, we have Soli, an 18-year-old desperate to leave her dead-end village.

“She was leaving! The promise of it stoked a flame that blazed through her….Already, this existence was nothing but a distant prick of light. Electrified by the promised of forward motion, Soli stretched up to kiss the sky, growing and growing, until she too was a flaming tower, a castle of light, sparking from the eyes, spitting streaks of joy.”

Part of the desperation stems from being abandoned by a succession of boyfriends and romance who, one by one, have all left for America.

“Popocalco offered no work, only the growing and eating of a few stalks of corn. When the money left, the people followed, except for the very poor and very old….always the same faces…not exactly waiting to die, Soli believed, but not quite living, either.”

Soli, an “Indio,” shares only the pleasant details of her former village life with her employers, the Cassidy family. She keeps the “thinner times” to herself.

“You don’t know poverty until it’s you who has to feed and clothe your children, her papi used to say. Poverty is a pit that rumbles in your gut. You squash it down and pack it over with family and drink and music, but still it rumbles, threatening any day to erupt and send you and everything you know careening down a hillside.”

How did Soli and Kavya’s story come to be? Sekaran described hearing a brief report on NPR in 2011 about an undocumented Guatemalan woman who was being threatened with deportation and fighting to be reunited with her child. The court ruled in favor of the adoptive parents. Horrified, Sekaran sought to understand how seemingly good people could be so eager to take this woman’s child. In the process, Lucky Boy was born.

Sekaran researched the case she’d heard on NPR. She also talked with adoptive parents, immigration lawyers and their clients, social workers, and infertility specialists. She read policy reports, including how current detention practices violate immigrants’ rights. And she shadowed a chef so she’d know what it was like to cook on a massive scale for a sorority house.

When it came time to revise her early draft, she studied the way Toni Morrison played with time  in her novel, Beloved. Sekaran then used similar techniques to shape the temporal structure of Lucky Boy, skillfully intermingling flashbacks with current events.

The novel raises many questions, including What defines motherhood? What is best for a child? What is the motivation behind wanting to take away another woman’s child? And on a more political level, How does our current immigration system create untenable situations and fail on so many levels?

I was gobsmacked by this book.

Having written for California Rural Legal Assistance, I had some idea about how horrific the trip across the border can be for those without documentation, but to feel it through the story of a teenage girl who’s filled with so much yearning for a better life? This, my friends, creates a form of empathy that intellectual knowledge and statistics cannot. The sheer weight of the details add to the pain. I had no idea that immigrants are being detained and moved to detention centers that are sometimes no more than tent encampments. They may not have proper clothing or bedding for cold weather even if their detention center is not heated. They can be abused (and often are) by their guards and treated like criminals.

And despite having committed no real crime, they are treated as if they have no rights. They often have no idea where they’re being taken or held, or when they’ll be transferred either to another facility or across the border. They have little access to any form of communication with the outside world, including lawyers. It’s a Kafka-esque system. One that fills me with dread when I put myself in Soli’s shoes.

The only difference between these unlucky immigrants and Shanthi’s parents? The U.S. government wanted her parents and their medical skills, similar to immigrants today who have desirable technology expertise.

Yes, this is tough subject matter, but there are also frequent moments of humor that ring so true, you may smile or laugh out loud. In a conversation between Soli and the cousin she has sought out in Berkeley, Soli’s cousin exposes the irony for many living in the Bay Area:

“‘Nobody here has any goddamn money,” Silvia told her. “Even the people who have money don’t have money.”

“It’s their houses, their houses are vacuum cleaners that suck up all their money. Those pretty trees? Money. Those nice flowers? Good paint, no water stains? Money and more money.”

“But they have homes. That’s something.”

“Mortgages,” Silvia said. “They don’t have homes. They have mortgages.”‘

Thus begins the education of Soli.

The story heats up when Soli’s status is discovered, she’s detained for deportation, and also separated from her son, who’s placed in foster care with Kavya and Rishi.

Against all odds, from the confines of multiple detention centers (where phone privileges are given or restricted arbitrarily) she tries to fight for the rights to her son. After days, possibly weeks, of being given only intermittent access to a phone, here is Soli on the morning of the first custody hearing. A guard has told her the phone “isn’t working.”

“But there was the phone. Soli could see the phone. The phone existed.

Soli tried a different tack. ‘Senora, they are taking my son away from me. I need to call the court. I will lose him. The phone in the office? The office phone?’

Her jaw clenched. ‘Get back to your cell.’

Weeks of frustration, desperation, isolation, and sleepless nights come to a head.

“‘I need the phone,’ Soli growled. She shoved the guard to the side and ran for the phone, but the guard was faster and stronger….

A door opened to a cushioned sunlit closet. The hands threw her in, and she bounced off a wall and landed hard on the padding.

From a skylight, the sun glared down.

Hours came and hours went. Somewhere in Berkeley, people were walking into a room, saying things about Soli and her son….The night passed. She didn’t move.”

Compare this to Kavya’s preparations for the hearing.

“The morning of the hearing, Kavya woke up, showered, dressed, and vomited. It happened so suddenly that she had no time to lunge for a trash can. One second, she was fastening her top button and the next, she found herself covered in a yellow sheet of bile…When she got to the kitchen, her mother was waiting. She’d asked her to babysit that day, had explained to her the reason for the hearing, the possible outcomes…something in her wanted her mother there, in case things went very badly, in case she needed to come home, quit her job, and crawl into bed for days.”

Clearly, lives will be shattered no matter the outcome of this dispute, as lives will most likely continue to be shattered in this country for the near and perhaps distant future. But if Sekaran’s novel can open some eyes to the devastation wrought by our national policies and immigration system, then perhaps the future will change for the better.

Thank you to Shanthi Sekaran for writing such a beautiful and important book. I can only hope that it gains wide readership.