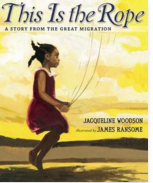 I loved Jacqueline Woodson’s MG/YA book, “Brown Girl Dreaming.” It was the first book I’d ever read by this fabulous writer. So I went in search of some of her picture books. And I’m happy to say that I love “This Is the Rope” just as much. So here’s my book for Susanna Leonard Hill’s Perfect Picture Book Friday:

Why I Like It: Lyrical language. Gorgeous and evocative illustrations (oil on paper) by James Ransome. A fictional story that tells a larger truth, it’s a book I could read over and over again.

Theme: The Great Migration of African Americans from the South to the North in the United States. A short foreword to the book explains how from the 1900s until the mid 1970s, more than six million African Americans moved from the rural South to several northern cities, including Chicago, Los Angeles, and New York City, seeking better lives. (It’s also a story of how families and individuals within them create their personal narratives.)

At the end of the foreword Woodson states: “‘This Is the Rope’ is a work of fiction. The rope we brought to this ‘new country’ was Hope. It remains with us.”

Story: The narrative traces the journey of a rope from South Carolina to New York City, a journey that takes it from the hands of a girl (the grandmother) skipping rope under “sweet-smelling pine” in South Carolina, ties it around the luggage strapped on top of car headed toward NYC, hangs it in an apartment to dry flowers, strings it out as a line to dry laundry for freshly washed diapers for the grandmother’s first baby(the author’s mother), uses it as a cord for a pull-toy as the baby gets older, entices neighbors to play jump rope with the growing girl, gets used to tie luggage onto the car as the teenage girl goes to college, and ties up a family reunion banner as the third generation takes its place in history.

The ending circles back to the grandmother, now holding that “threadbare and greying” rope, watching her granddaughter use a new rope for jump rope games. She holds onto that rope “and her long-ago memory of sweet-smelling pine.”

One of my favorite quotes:

“This is the rope my daddy used

when he showed me the way

to tie a sailor’s knot—

‘Two times around and pull it real tight.

You want whatever you make or do

Title: This Is the Rope 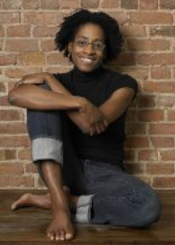 Jacqueline Woodson’s awards include 3 Newbery Honors, a Coretta Scott King Award and 3 Coretta Scott King Honors, 2 National Book Awards, a Margaret A. Edwards Award and an ALAN Award — both for Lifetime Achievement in YA Literature. She is the author of more than 2 dozen books for children and young adults and lives with her family in Brooklyn, New York

46 thoughts on “This Is the Rope – Perfect Picture Book Friday”

Look what just arrived! Clovis has stolen my ❤️!!! Thank you, @ljrwritenow and @authorkatelyn !! #bookstagram #booksofinstagram #picturebooks
80 books packed and ready for me to ship to teachers tomorrow. First round of Kidquake videos release this Friday!!! Fingers crossed we get the last 20 books stuck in the supply chain before #Litquake is over!
The undies for Where Three Oceans Meet. So perfect! Grandmother, mother, granddaughter…heartstrings “entwined as one, stronger than any alone.” #bookstagram #picturebooks #kidlit
Two more boxes of awesome books being packaged to send to Kidquake lottery winners!
Packaging books to send to Kidquake lottery winners!!! #LItquake #bookstagram @rajanilarocca
What we were doing on National Son’s Day. On point. #nationalsonsday #ER