A little over a year ago, we gathered family and friends on an island in Muscongus Bay in Maine to celebrate Peter Hoffmann‘s (my father-in-law) life and bury his ashes in the island cemetery. It was a glorious day—sunny and warm—for a picnic, wine, and shared memories.

Sarah, my mother-in-law, asked the kids to craft parachutes with candy payloads and toss them from the treehouse to represent the Berlin airlift of Peter’s childhood.

Later, we lighted a bonfire, dined in the darkness, and listened to some of Peter’s favorite jazz recordings.

Then Sarah passed away around 3am that night, most likely from a heart failure brought on by a severe asthma attack. She had long struggled with diabetes and asthma.

There is no word for the emotion. Shock is far too tame. Disbelief, a limp noodle of a word. Nothing could be said.

So we said little, hugged a lot, and kept the family close because we were going to bury Sarah’s ashes four days later. This is the birch log one of her three sons hollowed out to hold Sarah’s ashes. 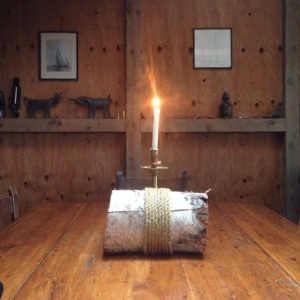 Giotto, Sarah and Peter’s dog, kept vigil while we waited to bury her beside Peter. 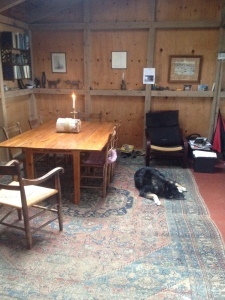 Throughout the days following her death, Giotto would suddenly stand, look out the window and howl silently.

This past August, family members gathered on the island to honor Sarah’s life. She loved children, always engaging them with stories and activities, like the parachute project for Peter’s memorial. Often times, sparklers were involved.

So we constructed a wooden origami crane. Our son and his cousins designed, nailed, nail-gunned, taped, and wired sparklers, roman candles, and fireworks waterfalls to the structure. Then at dusk, we set it floating on Muscungus Bay before lighting it on fire. We didn’t have a proper camera for the event, so phone shots will have to suffice. 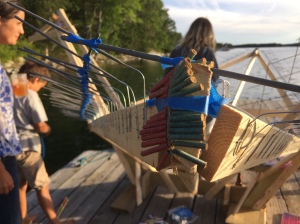 Setting the crane afloat on the old raft, The Rusty Blade: 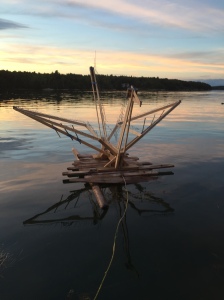 Shimmering across the bay:

Sarah also loved poetry. So when we returned, I donated to Tupelo Press’s 30/30 project, where selected poets write and publish a poem a day each month. I sponsored a poem from one of my favorite poets, and gave him only a title as starting point. Here’s Robert Okaji’s stunning and uncanny result:

Who is to say which comes first, the flaming crane

or the sunset’s burst just over the horizon

and under the clouds? There are causes and causations,

an illness named bad air and another attributed to wolf

bites, neither accurate. There is the paraffin to melt,

and the folded paper resting comfortably nearby, with

a small, unopened tin of shoe polish and the sound of

tears striking newsprint. You know the myth of the

and the deceased clothed in all his finery. But pyres

are lighted to make ash of bodies, to ease the soul’s

transition to the heavens. Think of how disturbing

it would be to come upon the charred lumps of your

loved one washed ashore. And other myths — various

versions of the afterlife created to bend wills and

foster hope where little exists — to which have you

departed? There are no returns in your future, no more

givings, and your ashes have dispersed among the clouds

and in the water. They’ve been consumed by earth and

sky, inhaled and swallowed, digested, coughed out but

never considered for what they were. So I’ve printed

your name a thousand times on this sheet, and will

fold and launch it, aflame, watching the letters that

comprise you, once again, rise and float, mingle

other names, partnerships, loves, ascending to the end.

Thank you, Robert. Sarah would have loved the poem you didn’t know you were writing for her.

Find more of Robert Okaji’s poems on his website: O at the Edges

or at the Tupelo Press 30/30 Project website under August poems. These will only be available until the end of September.