Returning from my long absence with a brief splash of a review for: 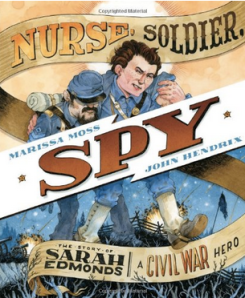 I just read Nurse, Solder, Spy for a nonfiction picture book course and was fascinated by the story of a young Sarah Edmonds who impersonates a boy so she can enlist in the Union Army. Moss writes with the urgency of a war reporter, and Hendrix’s pen and ink illustrations with their blue and gold/orange/yellow acrylic washes suit the era well.

The varied and sometimes hand-drawn typography can be startling—in a good way. For example, when a Confederate soldier hollers:

WHO DO YOU BELONG TO?”

the question fills half the spread, bringing home to the reader the awful nature of slavery. In his artist’s note, Hendrix explains that he took some of the typefaces from posters of that era.

My son and husband sat spellbound as I read them the story. After impersonating a young man and joining the Union Army, Sarah fought alongside Union soldiers and then disguised herself as a male slave so she could cross enemy lines as a spy. She discovered a Union traitor and made notes about Confederate fortifications and weapons to inform Union leaders once she returned.

From the back matter: During the war, she wore different disguises during each of her spying missions, suffered from malaria and was wounded twice but refused treatment so no one would discover she was a woman. In an additional twist to her story, we find out that she left the army briefly so she could get medical treatment for recurrent malaria, and when she decided to return to the army, she discovered she (her male counterpart) was wanted for desertion and was to be shot on sight!

So it wasn’t until two years later when her autobiography was published that anyone knew the truth. This young lady was unbelievably brave and finally recognized, through an act of Congress, as a veteran of the Civil War in 1889. Although other women served in various capacities during the Civil War, Sarah Edmonds was the only one ever recognized as a veteran. When her autobiography sold 175,000 copies in its first year (1865), she donated all proceeds from the sales to an organization dedicated to helping Civil War veterans.

The author includes additional information in the back matter that adds more depth and complexity to the story. I think this book would be a great read for 3rd graders on up. Older readers could use this text as a springboard for more in depth research. The back matter includes author and illustrator notes and bibliographies as well as a glossary and index. Well done all around!