According to my 10-year-old son, the American Revolution can be distilled to four panels (click photo to enlarge): 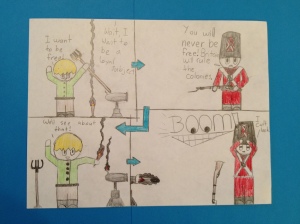 History of the American Revolution

He loved drawing this cartoon and spent a couple of joyful hours completely absorbed in his work. Note that the Loyalist character’s voice comes from off the page, showing how the Loyalists either operated under cover, “lost their shirts,” or returned to England.

But it wasn’t until much later that he noticed that the British musket in the second panel doesn’t match the musket shown in the fourth. He asked if this was a big mistake. In his case, I said “no,” but then I went on to describe a recent case taken from the adult world:

David Shannon gave a keynote talk this past weekend at the Golden Gate SCBWI conference where he showed his book, Duck on a Bike (2006), to the audience.

We love this book! The animal expressions are fabulous. Shannon receives repeated requests from kids across the U.S. for the follow-up book, Duck on a Tractor, so it’s a huge hit.

But he pointed out a mistake on one of the spreads that may have cost him (according to those in the know) the Caldecott Award.

Please take a look at the book and leave your answers below. Let me know if you’d like a hint. If you don’t own the book, here are two spreads that may help your analysis: 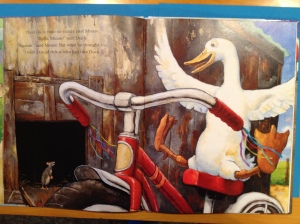 Back to my son and the fight going on in his Executive Brain.

Contrast the bliss of cartooning with the homework assignment where he had to write answers to three questions, finding his answers hidden among the pages of a historical novel.

He was asked to write a paragraph describing a short scene from the novel; distill the message from Henry Knox to George Washington about his progress in moving the canons from Ft. Ticonderoga to Cambridge, Massachusetts; and identify and compare the biggest problems faced by General George Washington and General Howe.

The writing effort spanned a two-hour period, this one not so joyful. His Executive Brain gets lost in making the transition from reading (where he excels) to writing (the most difficult thing in the world–for him).

Where am I and why are they torturing me?

I can only hope it will get easier.

50 thoughts on “What do David Shannon and My Son Have in Common?”

My current state of mind
The wildflower in me LOVES this book! #STEM #picturebook #bookstagram
And…another new favorite! Some pages may make you 😂 #picturebooks #bookstagram
This has got to be the coolest book-related activity ever!!! ❤️❤️❤️ #pride #nonfiction #picturebooks
I want to read this book
Books Inc warehouse sale today! a few unusual ones in this stack, too. Yay, indie bookstores!!