Well folks, it’s time for another trip down bad memory lane. In other words, this is not a writing-related post unless it counts as writing therapy to exorcise persistent devils.

We live in an old aircraft tire manufacturing building, otherwise known as a live/work loft in the glorious section of San Francisco called “Dogpatch.”  You can see a few photos of Dogpatch at the Dogpatch Writers Collective blog.

Unfinished concrete from the original building spans a 10×30 ft space inside our front door. You walk across this space and past a 12×12 inch beam footed by a rough block of concrete before reaching a living room area with short pile carpeting.

Now, I would rather chew nails than vacuum, 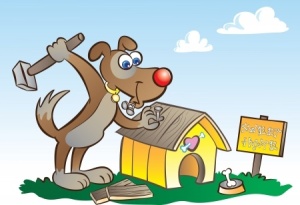 but we have a son who brings home sand, rubber pellets from artificial turf, rocks, dirt, and plant mulch in his shoes. When he takes them off on the concrete floor, the particulate flies everywhere. And then it piggybacks on socks over to the carpet, similar to nature’s seed dispersion strategies to ensure maximum distribution in the great outdoors. Only this is the great indoors.

A few years ago, my husband (dear sweet thoughtful person that he is) and son (always thinking about how he can improve his mother’s life, except when he’s dragging the outside world across our floors or dropping pennies down the drain of the bathroom sink, or creating smoke bombs, or….) thought they’d buy me the most fantabulous Mother’s Day present ever.

So on that day of days when we recognize and honor those unsung cooks, taxi drivers and sporting equipment schleppers around the U.S., I opened a mysterious box

What could it possibly be?

and voila!–a dog jumped out. Well, not a real dog.

It was Roomba, the pet iRobot whose marketing motto is: “So what if it takes longer for Roomba to vacuum your floors than it would to do it yourself. It’s not your time that’s being wasted! Roomba’s got nothing else to do, unlike you!”

I politely thanked them and then put Roomba in the closet. Oh, but that little pup wasn’t happy there. He (I decided it was male) whined and scratched at the door until my son and husband couldn’t take it any longer.

“What do you say we set Roomba up for mom,” said my husband. My son needed no more prompting.

They pulled the pup out of the closet and set up the light vector towers that keep Roomba from straying into forbidden territory. They charged his battery and then off he went with a bugle call reminiscent of the “Charge” played at all major and minor sporting events. 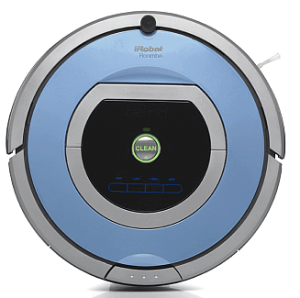 That thing whirred across the floor, sweeping up every little snip of dirt, sand, popcorn, and Lego connectors in its path. BUT, it took forever. Think of having to step out of the way of a peripatetic dog that refuses to lie down for half an hour, a nuisance you’d like to banish to the back yard. The space I could have vacuumed in minutes took this thing at least a half an hour to clean, crisscrossing and retracing its path in its conscientious thoroughness. Every time it rebounded off my feet, my husband and son said “But you don’t have to vacuum the carpet yourself!”

And when Roomba was finished, he alerted us with another bugle call and docked himself in his little sleeping station. The two “boys” fell over themselves to get to the station first, each wanting to see how much detritus he’d lapped up. They opened his little dirt compartment and looked inside. Oh my! They were beside themselves in ecstasy. The compartment was full, and the was rug clean.

“I’d say Roomba works like a champ!” came their cries from the living room. I was busy sulking in the kitchen.

Then I skulked off to another part of the house where I wouldn’t have to listen to the bugle call and chipper chirping of the danged electronic super sucker as they set it to feasting on the kitchen floor.

Fast forward a couple of months.

“So, why haven’t you used Roomba since Mother’s Day,” said my husband, no small element of hurt in his voice. “There’s sand everywhere.”

“OK, OK,” I said. “I’ll put Roomba to work this afternoon while you’re out at the park and I’m getting the oil changed.”

So with everyone else out playing, I arranged Roomba’s little light towers, hit the “on” button, and left the house as the call to “charge!” rang through the living room.

When I returned, I opened the front door. That day, the concrete entranceway contained a giant teepee, glass vases filled with water and rooting vines, two floor lights, and an assortment of string toys and electronic devices inside the teepee. But something was wrong. 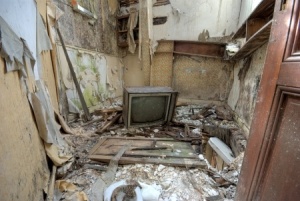 Something was wrong, but what?

The glass vases lay shattered across the concrete with water pooling everywhere. The teepee was lying on its side, exposing its contents: tangles of string and vines and electrical cords, more water, and Roomba mired in it all, his red “emergency” light flashing, his whirring noise silenced.

“Bad dog!!” I yelled and then spent the next hour cleaning up the mess made by my labor-saving device.

But when my husband and son came home, they refused to take my side.

“User error,” they said. “Don’t blame the dog. It’s all on you. You put Roomba’s guide towers in the wrong place.”

I fumed and haven’t used the thing since, despite the fact that the dang thing still worked once they dried it out.

Now, they’re talking about using its parts to create some other kind of robot, one that I hope I won’t have to clean up after. Stay tuned….

To be fair, the Website for iRobot Roomba says that the new models have clutter navigation, cliff detection, escape strategies, and anti-tangle technology. I’m thinking they got wind of my disaster and are trying to lure me back into the fold.

Someday, maybe. Once my Post Traumatic Roomba Flashbacks fade into the distance, along with its cheery battle cry.