Well, folks, I have returned from Squaw Valley, but I haven’t come down from my cloud–the one with a “9” painted on it.

My stellar morning workshop group sessions were led by Peter Steinberg (agent), Lynn Freed (novelist), Ann Close (Senior Editor at Knopf), Amanda Ward (novelist), Louis B. Jones (novelist), and Gail Tsukiyama (novelist), respectively, over the course of six days. The afternoon open workshops were led by Sands Hall (novelist/playwright/musician). I took an additional daily workshop called “Finding the Story” (writing therapy on steroids) from Gil Dennis (screenwriter), and I had my one-on-one critique with Greg Spatz (novelist/short story writer/musician) in the middle of the week.

Then there were the craft talks by Lynn Freed, Gil Dennis, Amy Tan, and Richard Ford, a host of afternoon panel discussions, faculty readings in the late afternoon and evenings, and the nothing-short-of-spectacular Squaw Follies (talent show) on the final evening. Imagine a show opening with a veterinarian-turned-writer/opera singer. Some people lay claim to all the talent. Couple that with other writers who can sing, Greg Spatz and his wife (Caridwen) playing bluegrass violin duets, and an evening-ending band, including the Spatz’s (Greg on guitar, Caridwen singing and playing the violin), Sands Hall and Chris Kiefer on guitars, Amy Tan playing the ukelele, and perhaps others I may have forgotten. The place was rockin’!

The one afternoon and evening we had free, a couple of other writers and I took the gondola from base camp (elevation 6200 ft) to high camp (elevation 8200 ft)–not for the faint of heart.

Another view once past the first peak tower. 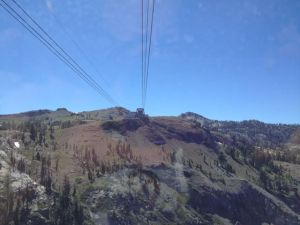 At the top, we could see Lake Tahoe in the distance.

A furry marmot checked us out, most likely tired of people wandering through its territory. 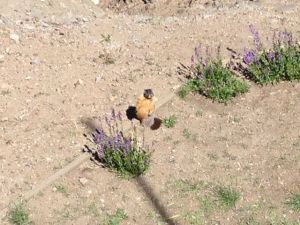 On our way down, we stopped at Shirley Lake to dip our toes in the cool water. 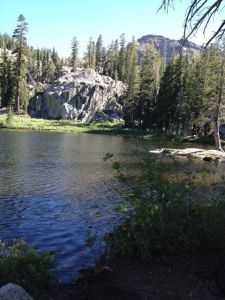 We lost track of the trail quite often, and the standard trail map wasn’t that helpful. It was usually marked with paint on the occasional rock, but we missed several turns and had to keep retracing our steps. Lots of scrambling over rock faces during the descent.

Toward the bottom, we finally reached a series of water falls and had to dip our toes once again. Really an excuse to linger in the wildness of it all after sitting on our bums for the past five days. Four hours after we started, we staggered into base camp, thigh muscles all aquiver. 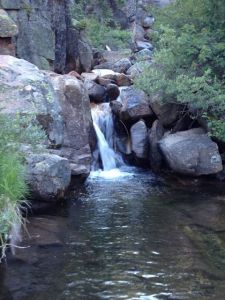 The sign at base camp greats everyone who enters the village. The tram/gondola building is the large concrete structure on the right.

My body and mind are still recovering. Stay tuned for more posts in the days/weeks to come. I’ll be on the road, visiting family during the next 5 weeks, but will try to post more about the Squaw Valley Community of Writers–with the emphasis on “community.”

Reordering poems in my #MG verse novel. Scrivener doesn’t give me the big picture I need. Hope this helps ease the brain pain.
Four recent favorite picture books, 2 fiction, 2 NF #picturebooks #bookstagram
Look what just came in the mail! It’s gorgeous! Thank you !!!#PictureBookBuilders @authorkimnorman @renee_m_latulippe @cameron_kids
#Repost @eumiel with @make_repost
My novel is with my agent. Time to eat all the chocolate before I get comments. #Dandelion and Feve
On my nightstand #bookstagram #kidlit