No matter what they say, how long and loudly they insist that they’re just like you and me, don’t believe them. Scientists are truly different. Case in point: the images they choose to adorn their bodies. In some instances, “festoon” may be the more appropriate word.

I’m talking about the book, Science Ink: Tattoos of the Science Obsessed. Published in 2011, it crossed my radar a few months ago at one of my favorite San Francisco independent bookstores, Green Apple Books, Inc. With a foreword by Mary Roach (of GULP [most recent], Stiff, Bonk, and Packing for Mars fame) and introduction by another popular science writer, Carl Zimmer, this book catches the eye with its cover: 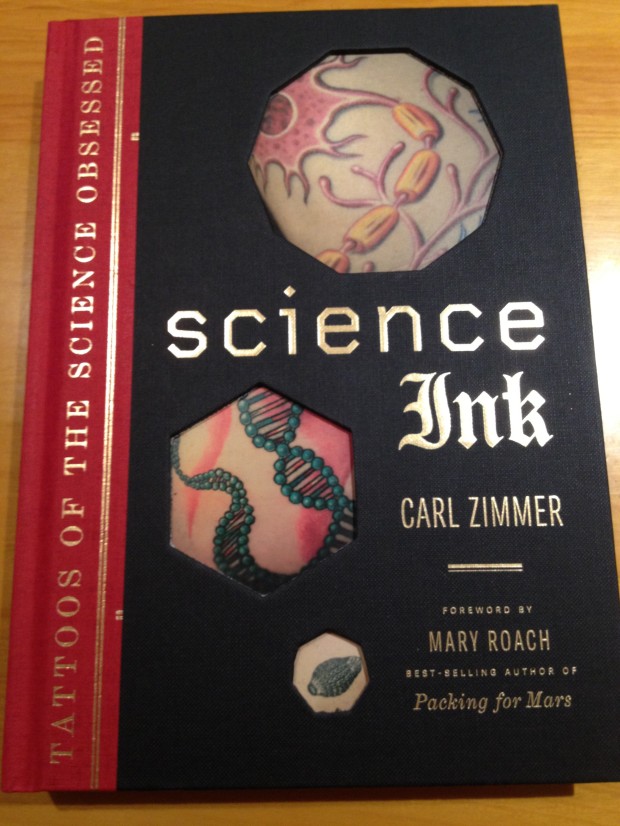 Science Ink came about after Zimmer noticed scientists were claiming their territories through tattoos–an anthropologist’s research study in the making. And over a period of years, he collected empirical evidence: photos and stories from scientists (and other science-focused people) about how their tattoos came to be.

But the book is more than a dip into eccentricities. It’s a nice little primer on many science/math concepts. From Bucky Balls to DNA to evolution and astronomy, this book covers a lot of ink.

In her foreword, Mary Roach contends that  “Scientists, as much as bikers or gang members, have the requisite motivator for a trip to the tattoo parlor: a passion that defines them.”

She’s not kidding. Some of the tatts on display are elaborate, eccentric, and esoteric. Others are simple, straightforward, and fairly well-known icons even to English Majors.

Check out the variety on the back end papers: 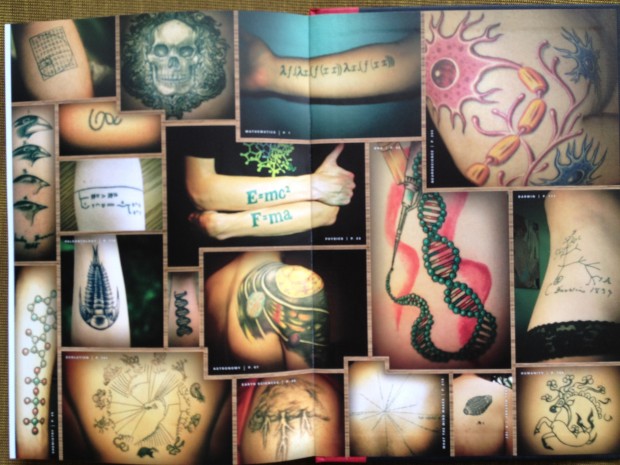 One inspired geographer writes: “On my back, I have a map of the world. It is a Strebe Equal-area projection, polyconic. It took me a year to figure out which projection I wanted to live with for the rest of my life…It’s very organic in shape, and I appreciate that it is Afro-centric and not Euro or Amer-centric.”

I’m thinking this woman is also a swimmer. She’s got great (lats) latitude. (Sorry, I won’t do that again.)

One young man who “always wanted a tattoo that would represent science, evolution and skeptical inquiry” settled on “a portrait of Darwin, inspired by The Blind Watchmaker by Richard Dawkins…Darwin plays the role of evolution, unable to see the genes he is engineering.”

Now I ask you, would you be able to sleep at night if the top of Darwin’s head was blowing off your calf muscle–although, it is a beautiful work of art…

Other tattoos are artistically much more simple but still depict complex concepts such as quantum mechanics’ “Schröedinger’s Cat. Suprisingly, this tatt is NOT sported by a scientist, but by an actor-comedian who says: “I’m a big fan of quantum mechanics (regardless of how little I truly understand it)…So getting a tattoo of  Schröedinger’s Cat seemed like a no-brainer. It’s on my right forearm, which means it ends up being a good conversation started after a quick handshake. Either people get what it is right away, or I have the pleasure of explaining ‘No, it’s not two cats fornicating, it’s one superpositioned cat.'”

In the famed thought experiment, the cat isolated inside the box is both dead and alive (it exists in two states) until someone opens the box to make the observation. The book goes on to explain how scientists have built a Schröedinger’s Cat system that allows electric current to flow clockwise and counterclockwise simultaneously around the same superconducting loop. Simple, eh? 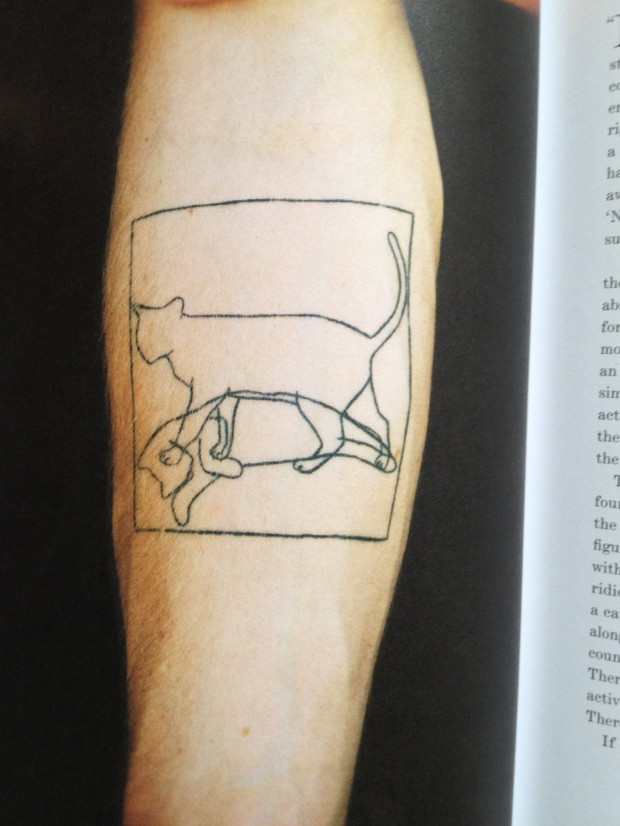 And then there are the sentimental scientists who dedicate their careers and tattoos to family members who have suffered with incurable diseases. A particularly poignant neuron tattoo (I can’t believe I just wrote that) is dedicated to a young scientist’s father. 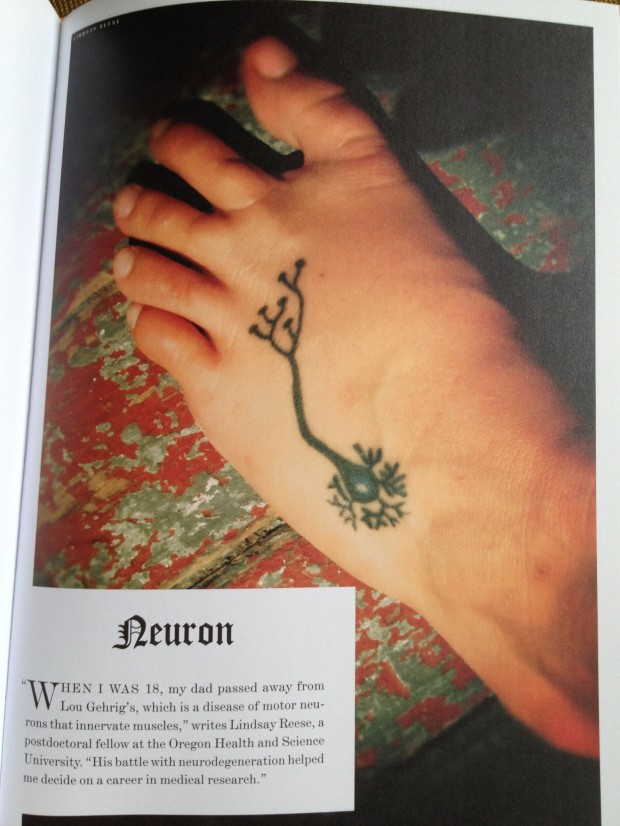 This book contains so many spectacular tattoos  (some more risqué than others) that I was tempted to include them all in this post. But I shall restrain the impulse, since I don’t have enough storage space on WordPress.

Suffice to say that Science Ink is a fascinating trip through math and science concepts, one that will appeal to both visual artists and those who want to dip their toes in various sciences without getting too far in over their heads.

27 thoughts on “Science Ink – A Book “Review” in Tattoos”